You, Me and the Apocalypse

"As crackling with comic chemistry as ever." - NY Post. Watch all seasons of Will & Grace!
Will & Grace | Video
Attention, shoppers: this comedy rocks. Start the season now!
Superstore | Video
In the afterlife, where do you belong? Start TV's #1 new comedy now!
The Good Place | Video 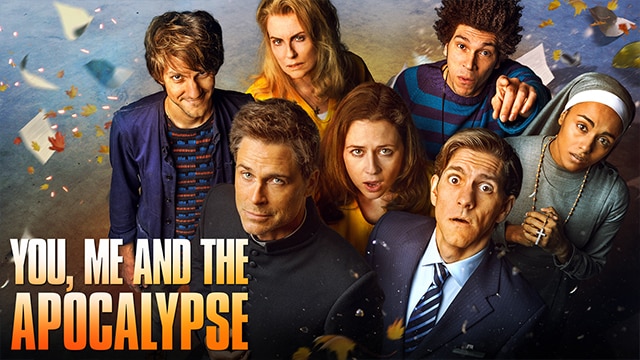 "You, Me and the Apocalypse" is a bold adrenaline-fueled hour-long comedic drama about the last days of mankind. When the news is announced that a comet is on an unavoidable collision course with Earth, the most hilarious and unexpected chain of events imaginable is set in motion. Against a backdrop of apocalyptic chaos, an eclectic group of seemingly unconnected characters around the world begin to intersect in the most unexpected ways, resulting in a nonstop mix of action, romance and wit.

The story follows an unusual assortment of mismatched characters, each coping with the impending end of the world in his or her own bizarre way. Perhaps the most complex is Father Jude (Rob Lowe, "Parks and Recreation"), a rebellious and foul-mouthed priest who is tasked with being the "devil's advocate" with the aid of his new timid assistant, Sister Celine Leonti (Gaia Scodellaro, "Cugino e Cugino"). Rhonda (Jenna Fischer, "The Office"), a mild-mannered librarian, finds herself dangerously out of her depth when she is sent to a maximum-security prison for a crime she did not commit. She unwillingly befriends Leanne (Megan Mullally, "Will & Grace"), an unhinged white supremacist who takes a deeply reluctant Rhonda under her wing. Morally dubious, but intensely loyal, Leanne is a woman uniquely suited to surviving the end times and will prove herself to be exactly the sidekick Rhonda needs.

Then there is Jamie (Mathew Baynton "Yonderland"), the humble bank manager from Slough who is hopelessly stuck in a rut and still in mourning over the mysterious disappearance of his wife seven years ago. Spurred into action as a result of the impending apocalypse, he embarks on a perilous quest to find his loved one.

There are 34 days until the comet collides with Earth, and some of these misfits are destined to make it to a bunker deep beneath the English suburbs of Slough. As a result, they will become the incredibly unlikely, and totally unsuitable, future of mankind. Wouldn't that be a disaster!

"You, Me and the Apocalypse" is written and executive produced by Iain Hollands. Juliette Howell, Lynn Horsford, Tim Bevan ("The Theory of Everything"), Eric Fellner ("Fargo"), JoAnn Alfano, Cameron Roach, Lizzie Gray and Andrew Conrad also serve as executive producers.